This driver update is required if you are using ESU1808 under Windows 7 32-/64-bit, Windows 8 32-/64bit or Windows 10 32-/64-bit. Please note that using this driver might require you to upgrade the firmware of your ESU1808, especially if you have used a driver older than v2.9.15 before. This firmware update only has to be done once on every unit, so if you have done this before, you don't need to do it again. This description is devided into three sections:

As mentioned, the firmware update is only required once even if you install the driver again. It should be done directly after the driver installation.

Make sure that you have downloaded and unzipped the driver file. To start the installation, launch the setup program, which is an .exe file that is inside the driver download, by double clicking on it. Typically the filename is something like ESU1808_vX.YY_setup.exe where X.YY is the version number of the driver. When launching the installer, Windows might display a security message. Make sure to allow the installation. After that, the following dialog will appear: 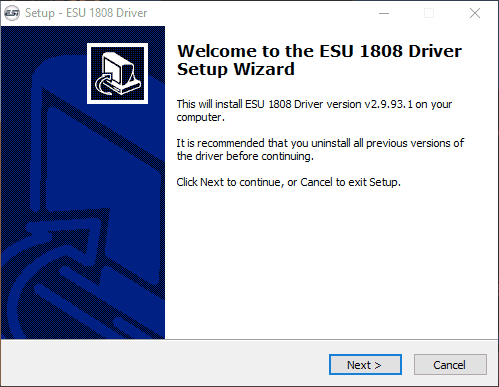 Click Next and then the following dialog will appear: 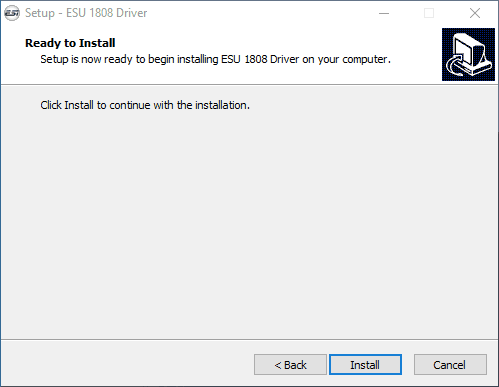 Now click Install. Files are now being copied. After some time an additional dialog will appear: 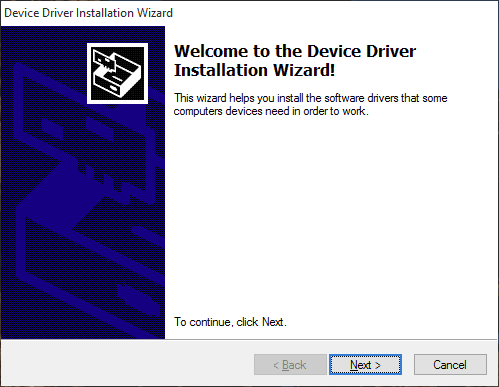 Confirm this by clicking Next. Again some files are being copied and typically you will be prompted with a Windows Security message like this:

Confirm it by clicking Install. After a while the installation then will be completed and the following dialog will appear: 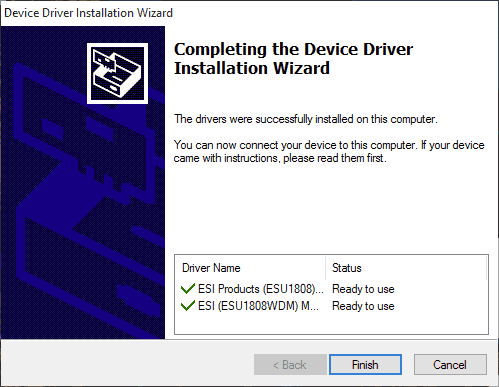 Once you see this, click Finish. On some systems it might be good to reboot the computer manually now, which can be dine with the following dialog: 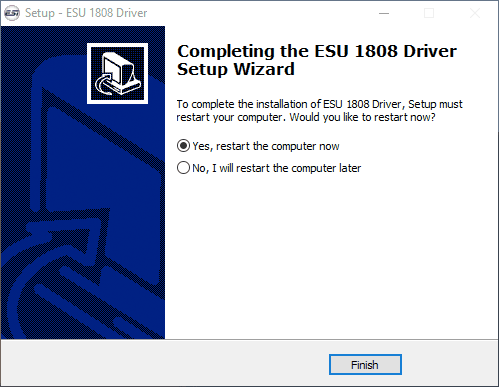 After the reboot, you can connect ESU1808 to your computer and start using it with this driver.

In case you need to uninstall the driver at a later time, you will find it under the list of installed Programs in Windows Control Panel. You can simply remove it there.

After the driver has been installed, it is required to update the firmware. Note that this is needed only once, i.e. if you install the ESU1808 driver again later or if you install the hardware on a different computer, you do not have to update the firmware again. To start the process, launch the firmware updater FWUpdate_ESU1808_1.08.exe from the Firmware subfolder of the unzipped driver file. The following window will appear: 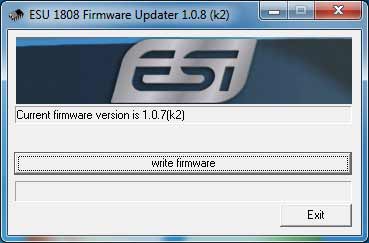 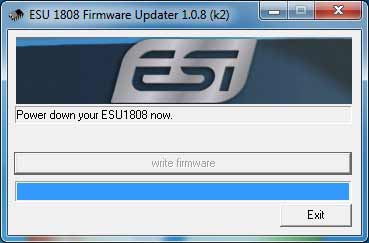 The message asks you to switch off or unplug the ESU1808. After you have done that, the following dialog will appear: 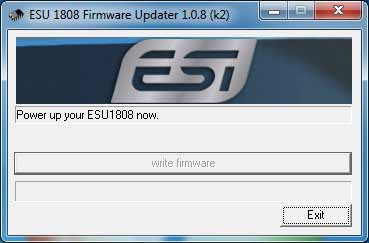 The message asks you to switch on or reconnect the ESU1808. After you have done that, the following dialog will appear: 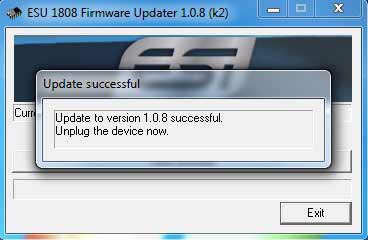 The message indicates that the update has been done successfully. Please proceed by switch off or unplugging the USB cable on ESU1808 again. The dialog will change like this:

Please finish the firmware update program by clicking Exit. Then wait a few seconds and switch on or reconnect the ESU1808 again. Even though it is not really required, we strongly recommend you to reboot your system once before using ESU1808 in your audio applications.